Embarking on our first journey overseas with Shemu was going to be fun. My tarot reader had already informed me of some complications initially but then I will end up having a load of fun. So true to date.

Complications are the best of times are bad, but I was interested in seeing how this whole thing was going to plan out.

Arriving at the airport met us with golf ball sized hail stones. This meant that we were shitting ourselves over our cars at home and the eventual grounding of our plane.

A two hour delay saw me begin my book, Geoffrey Blainey ‘A Short History of the World. It was at this point we ran into Jac, Mel, Lee, Hoges, Gia, and Jonsey. Our mood was set.. The wolf pack of two had gained another six.

Shemu and I were lucky enough to score Business Class Tickets, which meant food and drink to your hearts content. Which is where we met Brad. The coolest attendant I have ever met. We hit it off like house on fire. He rocked our world, well mostly mine, as it was me chatting away about our dissimilar taste in men.

Upon arrival, Shemu bartered a cab for half price to take us to Grandma’s hotel. The place really wasn’t bad. It had only been open for a couple of nights and everything was new. Reminded me somewhat of those crummy TUNE hotels in Malaysia. But we didn’t have to pay for the towels!

First plan was to get to Potato Head and buy NYE tickets. As Shem woke up at 530am we were out of the house by about 8am. Arriving at Potato Head to find it was not open until 11am. Urgh! Nothing a quick pedicure, manicure, massage and fish spa can’t fix. Shem even got himself a couple of flowers for his toes.

An early retirement to our room meant we were ready for the next night.

Heading into Kuta to meet up with Lou and Nicole, saw us at a beachside restaurant with Burlesque dancers or homo-erotic might paint a better picture. A few snappy shots and we were off to the main street of Kuta for some gritty bars.

So we hopped on a bike, on the back of some Balinese dude I’ve never met before. It wasn’t my finest moment. It also made me shit my pants. (Not literately) I’m not keen on motorbikes in the first place let alone on the back of a random male without a helmet. My serious and rationale brain was predicting consequences of an extraordinary level, but peer pressure and practicality got the best of me.

Disembarking the bike, we landed smack bang in the middle of Bintang singlet city. Most of my life I’m proud to be an Australian, but seriously did we export the entire Gold Coast to Bali? Bogans in Bitang shirts were the flavor of the street.

Fortunately for Shem, we run into the boys from the airport and it begins. I’m also learning that the national drink Arak is basically like drinking petrol and is responsible for the latest alcohol related deaths in Bali. I ordered a Crazy Duck instead.

Joining with the boys meant the night turned into a party. Just as soon as we’d met them, Lou and Nicole escaped into the night. I was on my own and I had ‘moves like Jagger’ that needed to be released. Put it this way, the morning after left us all with a bad taste in our mouths.

Leading up to NYE we had a few massive events including the evacuation of Mel, which lead to the hotel swap of Shem and I. We had moved in with the crew and things were only going to get better.

NYE consisted of us going to Potato Head. What a disaster! The place was packed. No seats and at least a 25 minute wait for a drink. And they sold out of water. Sober Mango was over it by 1230am. As appropriately termed, “Summerdayze in Bali”. The brushing past of sweaty men without shirts made me want to vomit. The coolest place in the venue was the toilets.

The preceding couple of days saw a similar pattern of pool, cocktails and nightclubbing. Down to the line, the boys were playing the finger game. The result was a Satay Bintang Cocktail skulled by Lee. Champion.

Shem and I now have the next couple of days to ourselves.. Looking forward some relaxation without the need for a cocktail. At this point no more Piña Coladas!! 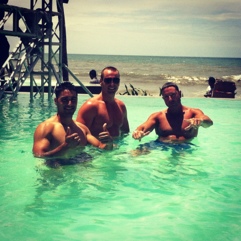